This whole process started back in 2008 when Builders Without Borders , under the guidance of Catherine Wanek,  built a small strawbale demonstration building on the terrace of the U.S. Botanic Gardens on the Mall in Washington D.C. The theme that year was Sustainability. I believe the staff at the Botanic Gardens was sad to see the little building go away. With the help of Rob Roy Mackey we hauled the building out to Sam and Kappy's land east of D.C. and plopped it down next to a work in progress, also strawbale. The Studio was built on site using mostly boards cut from trees on site or nearby. Some boards also came from the Glen Echo Bumper Car Pavilion thanks to Ranger Stan Fowler. Stan also gave us all the oak tongue and groove floor boards. The support beams are from the defunct Matapeake Ferry Terminal which was superseded by the Bay Bridge in 1952. Clay for the interior and exterior plasters came from an excavation site in Old Bowie that Sam happened to pass one day returning from work.
The two buildings represent two main ways of using strawbales. In the Ecohouse the bales themselves carry the load of the roof, hence the name "Load Bearing Style" also known as Nebraska style. The studio was built using a post and beam framework which allowed us to put the roof on first so there was no risk of getting the bales wet during construction. The Ecohouse got some serious rain during its construction, something like nine inches of rain fell during that two week period.
The buildings have different types of coverings, on the inside we used natural clay plasters with chopped fiber or coarse sand. On the outside , part of the Studio has natural plaster and the side exposed to the harsh weather has a lime plaster. The Ecohouse has all lime plaster which has been painted with mineral pigment colored lime wash. For insulation we used blow-in cellulose. The Ecohouse also has blue jean type batts.
There are two sections of the roof planted with sedums: the entry and over the bathroom. These consist of a waterproof layer (pond liner) over the roof deck with 4 or 5 inches of growing medium. They have done very well over the years and are almost totally filled in now. If you dig around the older posts you'll see how we did it and where we got the materials. In fact, you can go clear back to day one if you want to, it's all there.
Posted by eric at 7:56 PM No comments:

A slide show of past work on the Ecohouse and Studio

Green Roof Over Entry and Bathroom 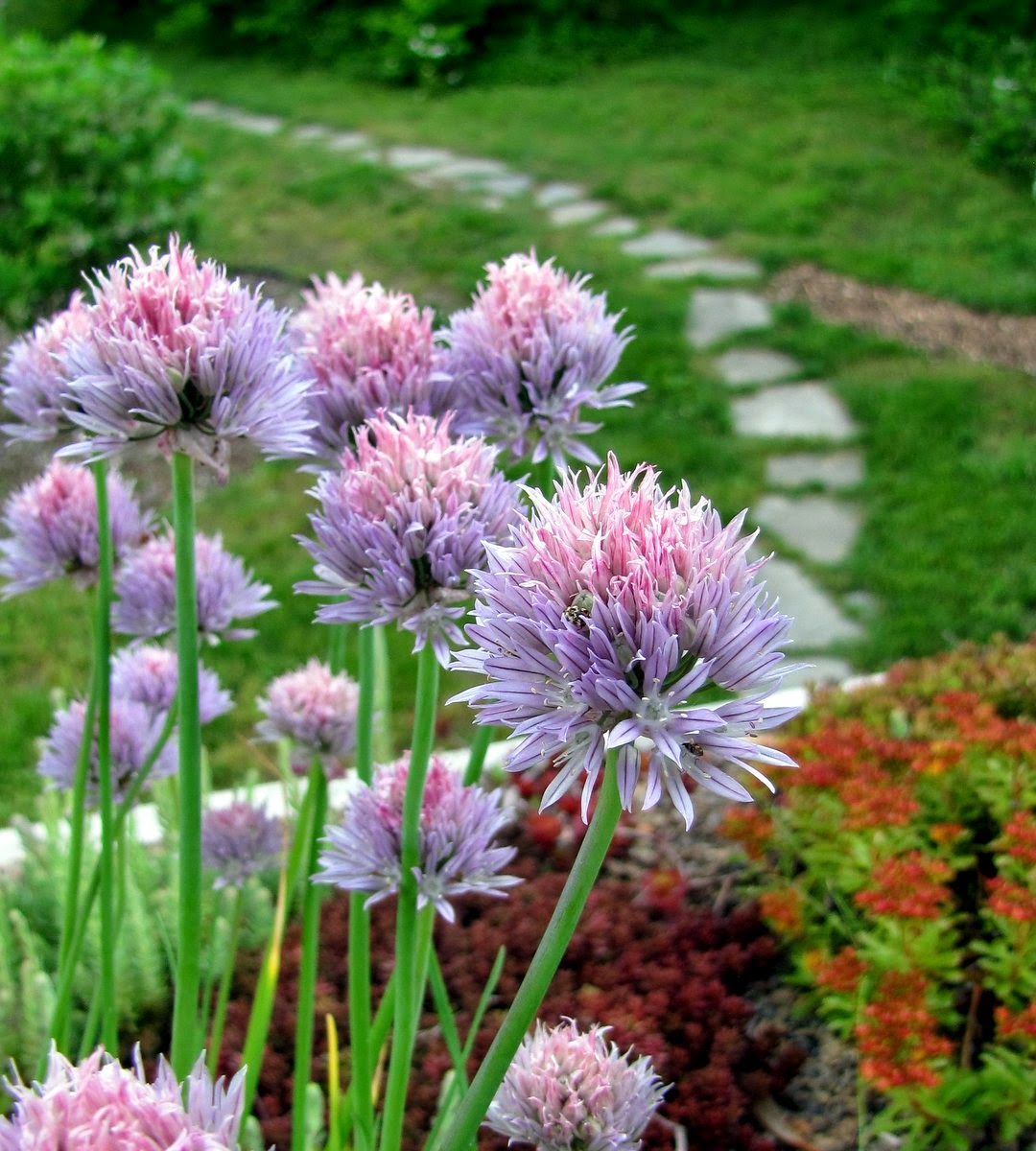 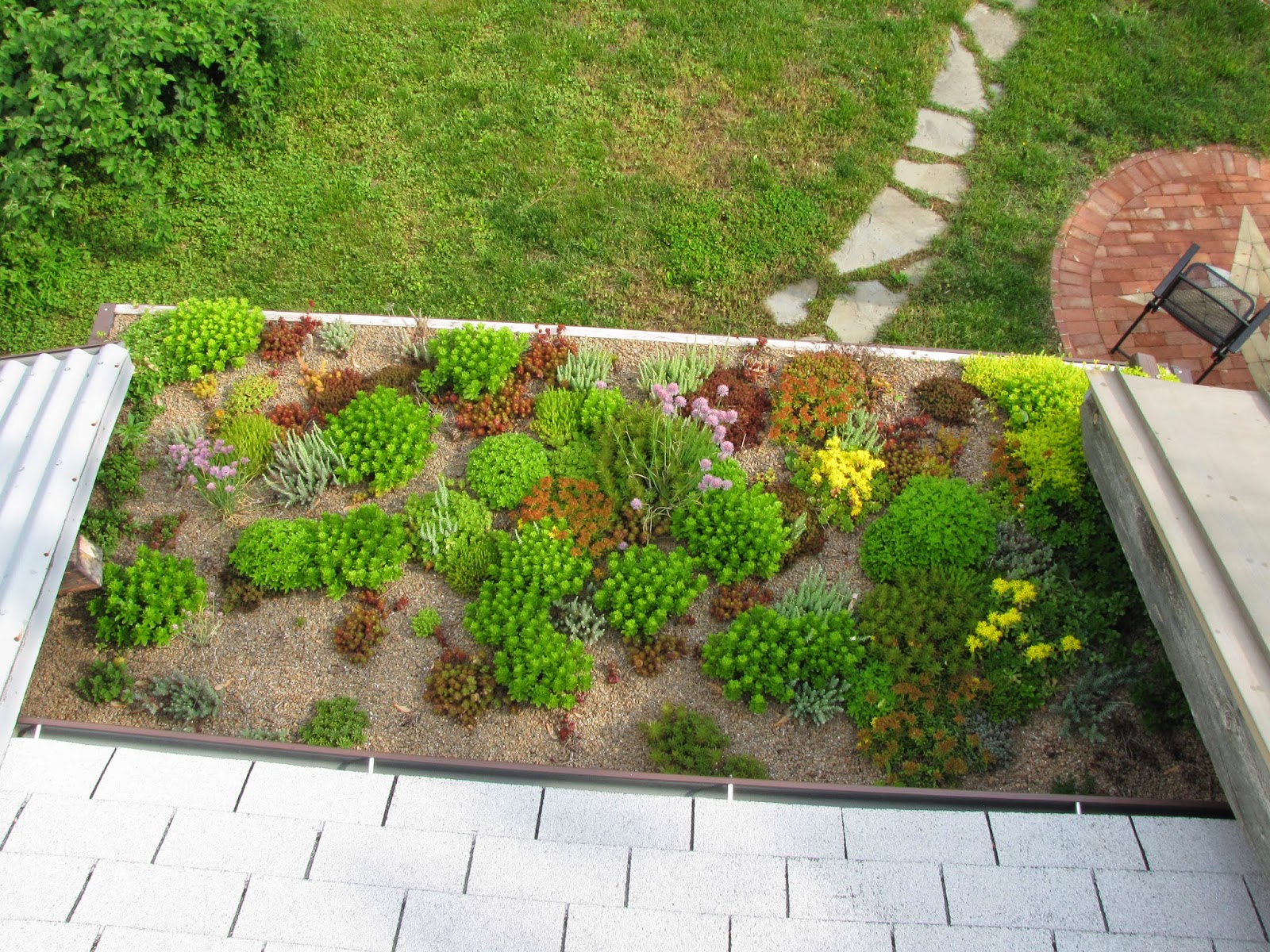 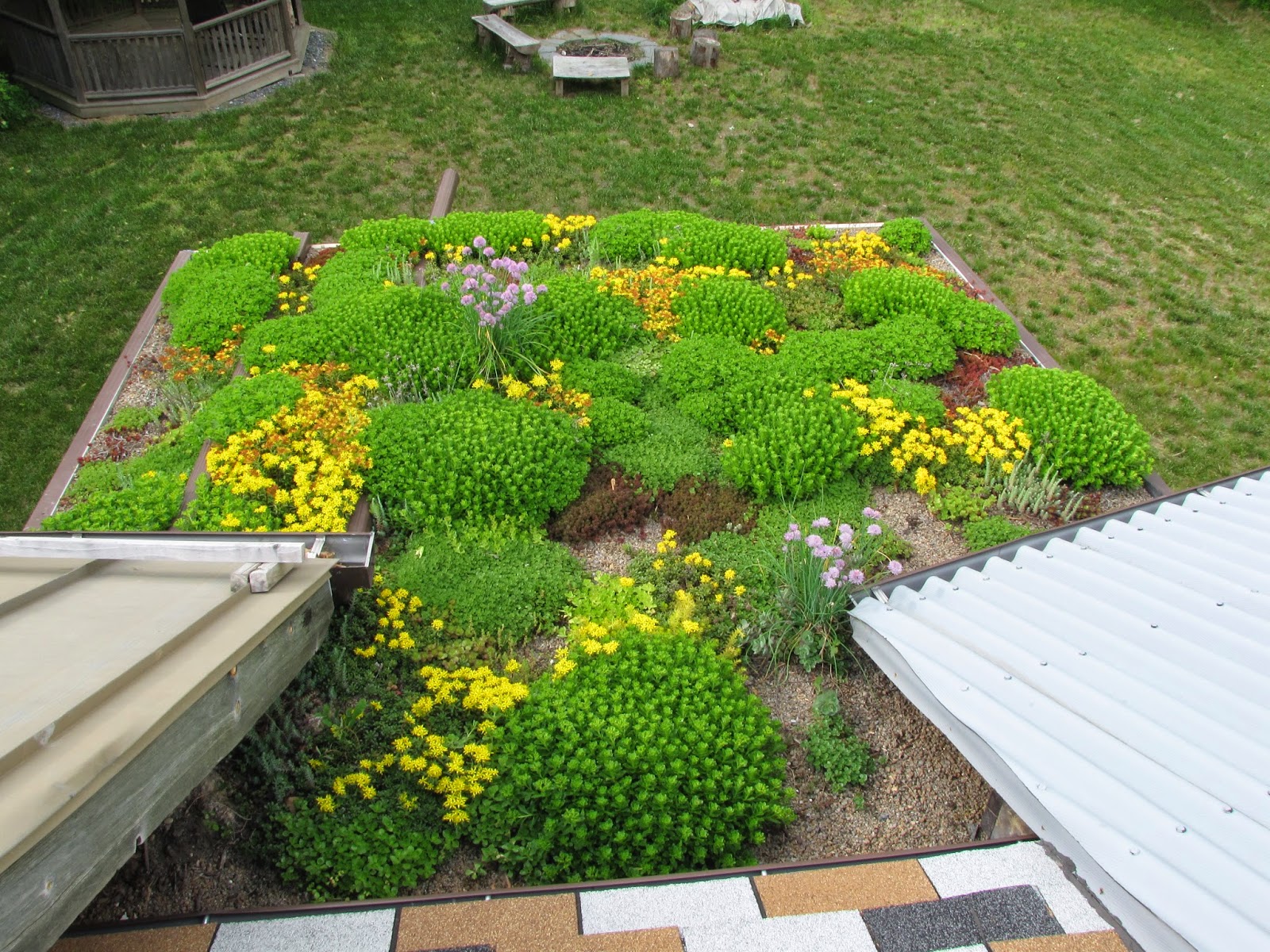 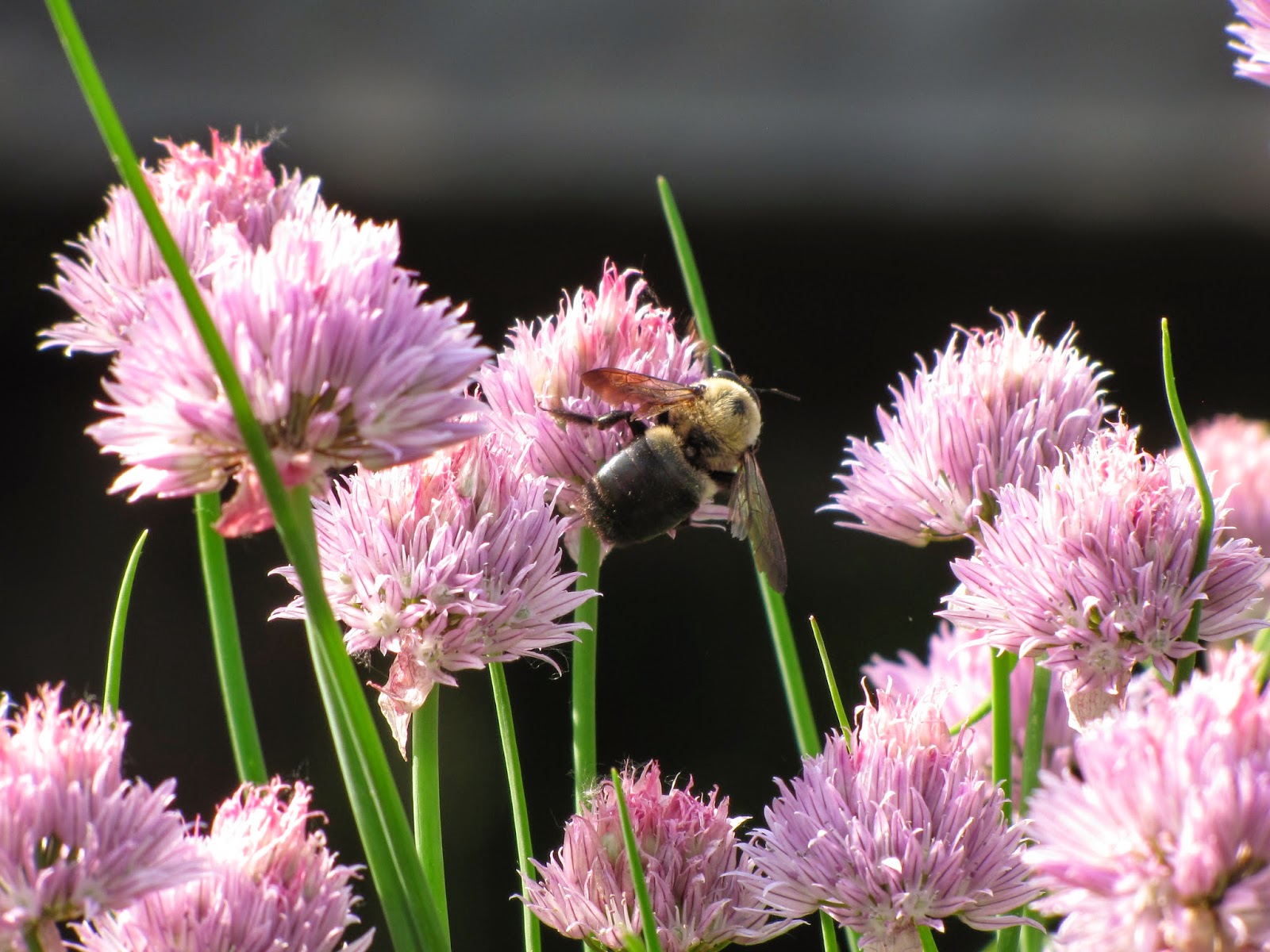 We liked the living roof over the bathroom so much we decided to retrofit the entry roof to give the front of the studio the same look. It took a bit of reinforcing and a piece of EPDM membrane to prepare the space. I went up to Emory Knoll Farms for the sedums. They can set you up for any climate zone. Then I stopped by Stancill's pit in Perryville, MD to get the special growing medium.

We took delivery today of our gazebo from Beiler's Structures They are located just around the corner here in PG county, outside Washington DC. They had a nice natural wood gazebo that for some reason sat around for a year behind the office. Of course in keeping with our thrifty ways we got a great deal on it since it was weathered. Looks good to us! First we put down a pad with 6" of CR 6, a type of roadbase surrounded by pressure treated 6x6s. They have an autonomous trailer that has its own motor thus sparing the yard harsh treatment by the pickup truck. Very slick setup. It will be the scene for bonfires and barbecues and of course Kappy's hammock. 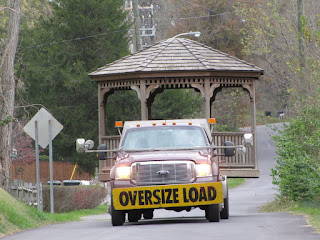 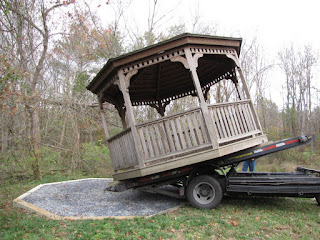 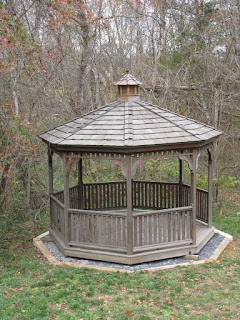 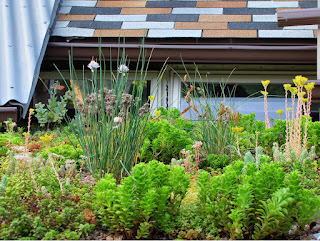 The sedums we bought at Emory Knoll Farms are doing well, some are flowering.
Posted by eric at 8:54 AM No comments: 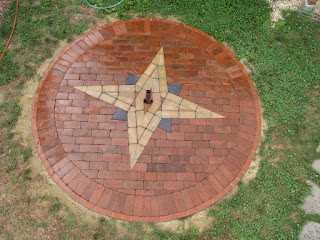 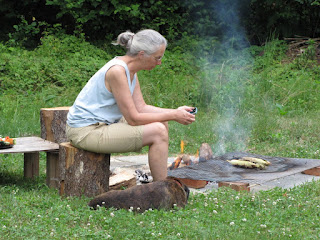 The compass rose is almost finished, thanks to Rob Roy Mackey for the bricks. The points indicate true north etc. The brick pattern is 11 degrees west of true north and corresponds to magnetic north. This is essentially our layout for the buildings. The Ecohouse is oriented on the true north axis and the Studio is on the magnetic lines. The reason for the difference is purely aesthetic. In the other photo, Kappy and Ripley are enjoying a barbecue at the new fire pit.
Posted by eric at 8:16 PM No comments: 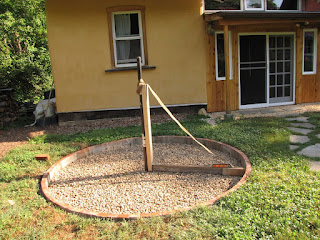 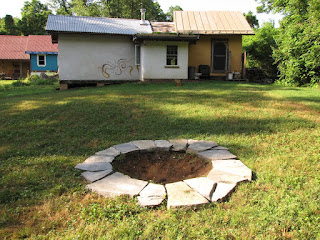 The pad for the brick patio is ready. We put bricks on end around the perimeter and filled the bottom with leftover pieces of granite countertop and gravel. On top of this will go sand and then some pattern of brick , yet to be decided. In the back of the studio there is now a firepit which we plan to inaugurate soon with a bbq.
Posted by eric at 8:55 AM No comments: